Cerebellum is the greatest part of the hindbrain (rhombencephalon); from rhombencephalon will develop pons Varolii, medulla oblongata and cerebellum.

localization in the cerebellar fossa of the cranial cavity; this fossa is formed by the post. fossa of the endobase covered by tentorium cerebelli;

general shape of cerebellum - it has somehow an ovoid shape which is flattened from upside down and constricted in its median region;

principal components 2 cerebellar hemispheres which are joined in the median part by vermis ("vermis" means worm) which is a narrow region with the aspect of a worm and represents the "constricted" region;

its surface presents many transverse sulci which pass in the same time on hemispheres and vermis; these sulci are generally superficial and separate small rounded folds called folia and only some of them are deep and separate the lobules of cerebellum being called fissures

the horizontal fissure is the greatest and deepest cerebellar fissure, has horizontal direction and separates the cerebellar surface into a sup. surface and an inf. one;

the sup. surface of each hemisphere is related with tentorium cerebelli;

at the level of the inf. cerebellar surface, the cerebellar hemispheres are separated by a notch called vallecula; it is determined by the existence of the medulla oblongata which is pressed on the inf. part of the vermis;

an ant. cerebellar notch is adapted to the pons; it lies at the level of the sup. surface of cerebellum;

a post. cerebellar notch separates dorsally the hemispheres; in this notch enters the falx cerebelli;

lobes and fissures of cerebellum:

the fissures are prolonged both on vermis and hemispheres and bear the same name at the both levels; 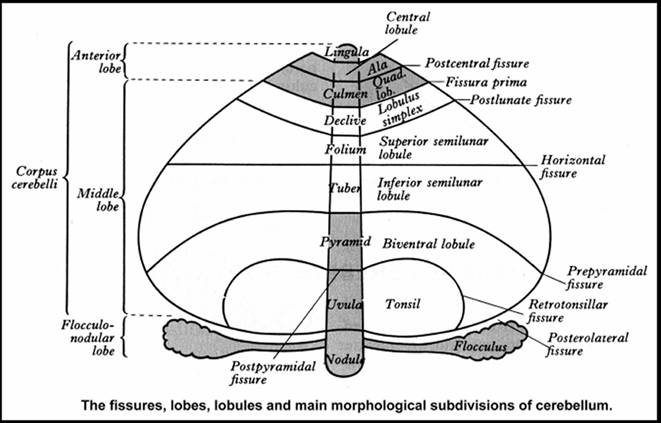 on a sagital section it has the aspect of a "tree" formed by many laminae that diverge radially; these laminae are projected towards the surface where they are covered by the cerebellar cortex; from these primary laminae begin many "secondary laminae" branching at very obtuse angles and is possible that secondary laminae will also branch into "tertiary laminae"; a11 these laminae are covered by the layer of grey matter of the cerebellar cortex; totally, this aspect on a sagital section that looks like a very rich ramified tree was called "arbor vitae" (tree of life):

the white core contains the next types of fibres

proper fibres - they are intrinsic fibres that connect different cerebellar regions; there are more types of proper fibres

association fibres are generally short fibers that connect the cortical folia of the same hemisphere and of the vermis; they do not decussate;

projection fibres connect the cerebellum with the other levels of the CNS; they form 3 pairs of large cerebellar peduncles which seem to arise from the ant. cerebellar notch:

afferent cerebellar fibres through the inf. cerebellar peduncle form the next tracts:

efferent fibres from cerebellum through the inf. cerebellar peduncle form the next tracts:

sup. cerebellar peduncles are 2 bundles of fibers that converge in sup. direction and connect the cerebellum with the midbrain;

Afferent projection fibres synapse first, as a rule, into cerebellar cortex; they form the so-called mossy fibres and climbing fibers

cerebellar input is somehow distributed after some rules to the phylogenetical subdivisions of cerebellum as it follows:

pontocerebellar and inf. olivary connections at the level of hemispheres of the middle lobe;

tectocerebellar input at the level of vermian and paravermian regions;

it consists of 3 layers in which 5 types of neurons can be met; from the surface to the deep we find the next layers

molecular layer contains the next elements:

the rich ramified dendritic trees of Purkinje cells whose bodies lie in the next layer; these dendritic trees are ramified just in one plan of the space which is perpendicular on the long axe of the cerebellar folia;

neuronal bodies and both types of prolongations of the outer stellate cells which have a superficial localization at the level of molecular layer;

neuronal bodies and prolongations of the basket cells that lie deeper at the level of this molecular layer;

axonal terminals of the granular cells whose neuronal bodies lie in the granular layer; these axons bifurcate in the molecular layer and will extend in opposite direction but both of them remain parallel with the longitudinal axe of the folia and traverse the dendritic trees of molecular layer (they were compared with the telegraph wires through the branches of bushy trees);

terminals of the olivocerebellar climbing fibers that ascend through the other 2 layers to synapse the Purkinje dendrites in molecular layer;

the small bodies of the granular neurons and a part of their axons which ascend to the molecular layer; the dendrites of these neurons are also ramified inside this layer and form some terminal expansions;

ramified terminals of the mossy fibers; 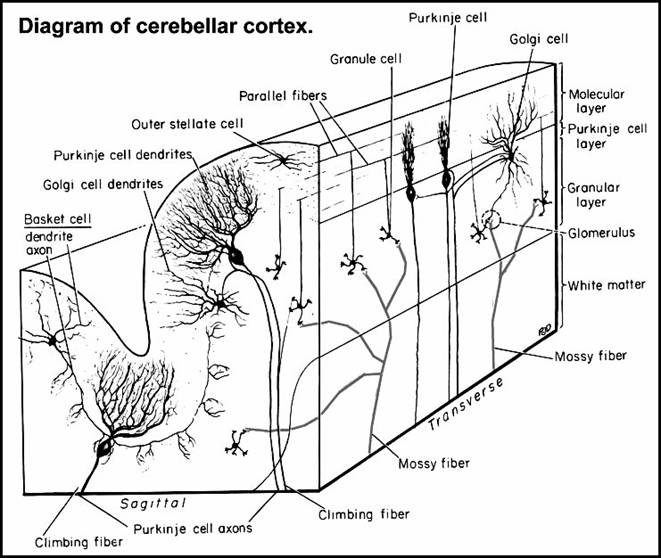 neuronal interconnections in the cerebellar cortex

synapses with Purkinje cells are made by:

parallel fascicles of axons from the granular neurons which run through the dendritic trees of Purkinje cells synapsing them;

climbing fibres which are ramified following the ramification of Purkinje dendrites to make very numerous synapses;

axodendritic synapses of the axons of outer stellate cells with the dendrites of Purkinje cells;

collaterals from the axons of basket cells which synapse with the dendrites of Purkinje cells;

synapses with granular neurons are made by:

terminals of mossy fibres and axonal terminations of Golgi cells upon the dendrites of granular cells; they form totally the so-called "cerebellar glomeruli

synapses with basket neurons are made by:

the parallel fascicles of axons of granular neurons;

the axons of basket cells run in the transverse plan of the folia and synapse with the neuronal bodies (in fact with the preaxon) of the Purkinje cells;

synapses with the outer stellate cells are made by:

the parallel fascicles of axons of the granular neurons;

the axons of outer stellate neurons 1ie also in the transverse plan of the folia and synapse on the dendrites of Purkinje cells or on their preaxon like the basket cells;

synapses with the Golgi neurons are made by:

the parallel fascicles of axons of the granular a1 function:

they are masses of grey matter embedded into the cerebellar white core;

from the lateral to medial direction they are: dentate nucleus, emboliform nucleus, globose nucleus and fastigial nucleus; in fact they are 4 pairs of nuclei:

dentate nucleus is the most lateral one and lies near the white core of its hemisphere; it has the shape of a folded bag like the inf. olivary nucleus; the opening of the "bag" is called hillum and it allows the efferent fibers to pass out in order to form an important part of the sup. cerebellar peduncle;

emboliform nucleus - it partially covers the hillum of dentate nucleus which is oriented medially;

globose nucleus - lies medially to the emboliform one; it is elongated in dorsoventral direction;

fastigial nucleus - it lies near the midline in the ventral part of sup. vermis;

afferent connections of the cerebellar nuclei are from intrinsic and extrinsic sources:

Mechanisms of the cerebellar cortex:

mossy fibres exert a diffuse excitatory effect on Purkinje neurons via the thousands of synapses made by the axons of granular neurons (parallel fibers) with the dendrites of more Purkinje cells;