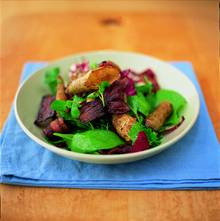 As far as salads go, this is a real hearty one, full of flavour and pretty damn gutsy.

The idea behind warm salads is that you have interesting an 747v2118h d slightly more robust salad leaves, usually mixed with sauteed vegetables or roasted meat. Anything from chicken livers, smoky bacon and scallops to roasted tomatoes, pine nuts and caramelized onions, anything really. Smoky bacon and artichokes is a brilliant combination.

For this recipe I normally use around 2 artichokes and 2 strips of bacon per person, but it really is up to you. I also use any combination of radicchio, cos, oak leaf, curly endive, rocket and baby spinach.

Rip the leaves up and place in a salad bowl or on a plate. I prefer to scrub the artichokes instead of peeling them, before cooking in salted boiling water until just soft. Cool under cold running water, drain, and slice as you would sauteed potatoes. Then in a large frying pan fry some dry-cured streaky bacon, which should be sliced across as thick as you like. When golden crisp, remove from the pan and put to one side. Add your sliced artichoke to the pan with a small lug of oil, a little butter and some salt and freshly ground black pepper. Shake the pan occasionally, adding the bacon back into the pan when the artichokes are also golden and crisp. Sprinkle over the salad leaves and drizzle generously with either the basil and balsamic vinegar dressing mustard and herb vinegar dressing.